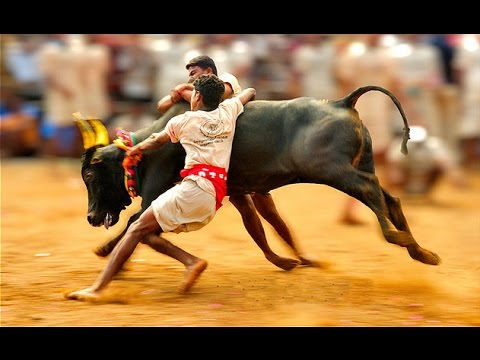 Jallikattu (Tamil: சல்லிகட்டு, challikaṭṭtu) also known as Eruthazhuvuthal (Tamil: ஏறுதழுவல், ērutazhuval) or Manju virattu (Tamil: மஞ்சு விரட்டு), is an event held in Tamil Nadu as a part of Pongal celebrations on Mattu Pongal day. Bulls are bred specifically by people of the village for the event and attended mainly by many villages’ temple bulls (koil kaalai). A temple bull is like the head of all cattle in a village; special rituals will be performed for this temple bull during important days. During the event, prizes are announced to encourage the youth to participate. After the event, tamed weak bulls are used for domestic activities and agriculture, meanwhile the untamable strong bulls are used for breeding the cows. It is said to be ingenious where both sport and preservation of Ecosystem works well together.

Jallikattu has been known to be practised during the Tamil classical period. It was common among the ancient people aayars who lived in the ‘Mullai’ geographical division of the ancient Tamil country. In May 2014, the Supreme Court of India banned the practice, citing animal welfare issues.