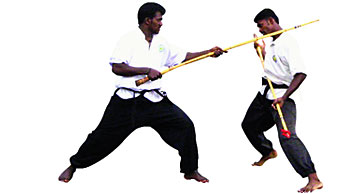 Silambam or Silambattam (Tamil: சிலம்பம் அல்லது சிலம்பாட்டம்) is a weapon-based Indian martial art from Tamil Nadu, but also traditionally practised by the Tamil community of Sri Lanka and Malaysia. It is closely related to Keralan kalaripayat and Sri Lankan angampora. It derives from the Tamil word silam meaning “hill” and the word perambu from which the English “bamboo” originates. Silambam referred to the sound derive from swinging of the perambu a particular type of bamboo from the Kurinji hills in southern Indian sub continent. Thus silambam was named after its primary weapon, the perambu(stick). The related term silambattam often refers specifically to stick-fighting.

Oral folklore traces silambam back several thousand years to the siddhar (enlightened sage) Agastya. While on his way to Vellimalai, Agastya discussed Hindu philosophy with an old man he met, said to be the god Murugan in disguise. The old man taught him of kundalini yoga and how to focus prana through the body’s nadi (channels). Agastya practiced this method of meditation and eventually compiled three texts on palm leaves based on the god’s teachings. One of these texts was the Kampu Sutra (Staff Classic) which was said to record advanced fighting theories in verse. These poems and the art they described were allegedly passed on to other siddha of the Agastmuni akhara (Agastya school) and eventually formed the basis of silambam, siddha medicine, and the southern style of kalaripayat.