The Canadian Tamils of Sri Lankan origin is one of the fastest growing community in Canada, particularly in the city of Toronto, Ontario. Canada is now home to more than 250, 000 Tamils, of which approximately 200, 000 live in Toronto.

The history of Tamils in Canada goes back to the 1940s, when a few hundred Tamils migrated to Canada. Among the first Tamils to immigrate to Canada were predominantly English-educated individuals from India and Sri Lanka. Many had professional qualifications and were seeking to find better prospects for their education and talents. A substantial proportion came as graduate students and, after completing their studies, found jobs and remained in Canada.

A significant number in the 1960s and 1970s came by way of Great Britain, where they had previously settled but become disenchanted with increasing racism in that country and lured by greater economic opportunities in Canada. Since the majority of newcomers were well educated and familiar with British institutions, they had few problems adapting to Canadian life. These early Tamil immigrants were highly mobile and settled wherever they could find adequate employment. Many moved to Alberta during the boom in oil production there in the late 1970s and early 1980s.

The vast majority, however, arrived in Canada after 1983 in the aftermath of communal riots in Sri Lanka. They settled in the urban centres in Toronto (Province of Ontario), Montreal (Province of Qubec) and Vancouver (Province of British Columbia). The Waterloo Region and Ottawa is becoming a popular immigration centre because of popular Universities and High tech. Industries.

Canada is now home to the largest Tamil population outside of Sri Lanka and South India. Within this short period of time, Tamils have established a mounting presence in multiple aspects of Canadian life: business, academic, political and social. The Tamil business community has grown in leaps and bounds, with over 2,000. in the City of Toronto. Tamil businesses range from grocery stores and restaurants carrying South Asian foods to astrologers, marriage brokers, car dealers, computer shops, insurance brokers, and real estate and travel agents. The majority of Tamil business ventures appear to be successful, and indications are that they are growing./p>

Some prominent Tamils include:

Our home and native land!
True patriot love in all thy sons command.

With glowing hearts we see thee rise,
The True North strong and free!

From far and wide,
O Canada, we stand on guard for thee.

God keep our land glorious and free!
O Canada, we stand on guard for thee.

O Canada, we stand on guard for thee 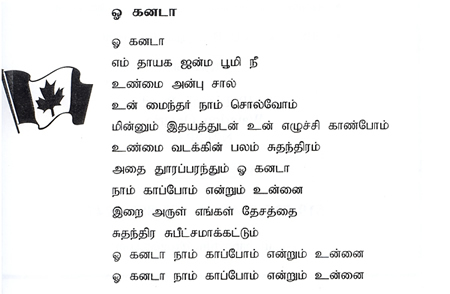 If you are a newcomer to Canada, you must adapt to a new culture, language and climate. Tamil Cultural Association of Waterloo Region wants to help you become familiar with your new surroundings and find a job. Come and join us at one of our many events to find out more. Find out about our upcoming events. We also provide some useful sites to ease your transition into Canadian society.

Every year, Canada plans to accept a couple of hundred thousand immigrants, to meet goals of economic benefit to Canada, family reunification, and humanitarian commitment. At Citizenship and Immigration Canada, you can find out how immigrants are selected, where to go and how to apply.

Province of Ontario is one of the 10 Provinces of Canada. The Capital City of Ontario is Toronto. Multiculturalism is what sets Toronto apart from other big North American cities. Toronto is home to virtually all of the world’s culture groups and is the city where more than 100 languages are spoken.

This is an example widget to show how the Right Sidebar looks by default. You can add custom widgets from the widgets screen in the admin. If custom widgets are added then this will be replaced by those widgets.